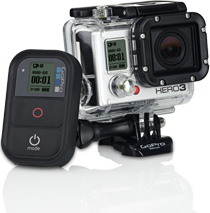 GoPro just announced the upcoming release of the GoPro HD Hero 3 and started accepting pre-orders. The new GoPro Hero 3 is reported to have a faster processor, an improved lens, is 30% smaller and 25% lighter than the Hero 2. The Hero 3 will be available in 3 different versions at three different price points; White (good), Silver (better), Black (best).

The new housing that comes with all versions of the Hero 3 looks similar to the Dive Housing for the GoPro Hero 2. (The Dive Housing was a $49.99 accessory for the Hero 2.) This new housing should allow the user to take professional high-definition underwater video and stills without having to make an additional purchase. In addition to the housing upgrade, all three versions of the Hero 3 come with Wi-Fi built right into the camera, saving the consumer from having to purchase the $99.99 Wi-Fi BacPac accessory. White and Silver Editions will not come with the Wi-Fi remote ($79.99), however it’s not required to take advantage of the Hero 3’s Wi-Fi capabilities; a free app for iOS (available now) and Android (coming soon) smartphones will allow full remote camera control.

There Wi-Fi remote & price points aren’t the only differences between each version of the Hero 3; there are substantial differences in camera imaging capabilities. Each camera has different burst shot capabilities, megapixel stills, video resolutions and frame rates.

About the Author: Jay