We recently caught wind that Dimmitt Chevrolet took delivery of a few 2014 Camaros, so of course, I had to stop by and see for myself. Two 2014’s were immediately spotted while entering the dealership; one 1LT/RS, and one 2LT/RS. After asking one of the sales people about SS’s, they escorted my wife and I to the rear of the dealership where two non-RS V8’s sat, awaiting inspection.

Some of the differences spotted on the non-RS SS’s and the RS equipped Camaros are, the taillights, headlights & small accents on the front end. The image below shows the differences between the non-RS and RS tail lights. (The left is the V8 which is why it has dual exhaust tips.)

The differences between the front ends of the non-RS and RS equipped Camaros are a bit more obvious. The RS equipped 2014’s have a chrome accent around the lights and across the front facial lip, HID headlamps, Halo rings, and a small accent piece over part of the turn signal with the word “CAMARO” cut out of it. 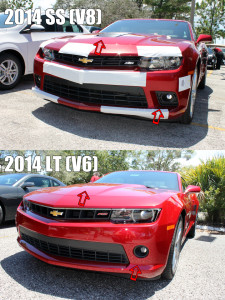 The front fascia on the 2014 V6 (LT) is definitely more aggressive looking than its 2010 – 2013 siblings, and looks nearly identical to the V8 (SS). However the V8 fog lamps have a square bezel around the HID fog lamps while the bezels around the V6 are circular.

The “mail slot” has obviously been removed from the 2014 SS models, yet all SS’s come with a functional heat extractor built into the hood; it’s not nearly as large, or as attractive as the ZL1 heat extractor, but it IS functional.

The final model differences I found while inspecting the new 2014 Camaros were the driver information center (DIC) and the heads-up display (HUD). It seems that regardless of purchasing the RS package or not, the 1LT Camaro does not come equipped with a HUD, and the DIC looks identical to the 2011 – 2012; the DIC in the 2LT was equipped with a color DIC and color HUD. 😀 – Jay

Here are a few more pictures I took during my visit to Dimmitt Chevrolet this morning; enjoy! 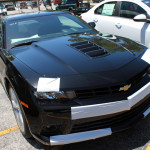 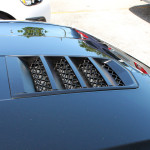 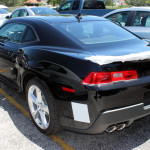 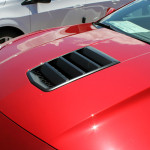 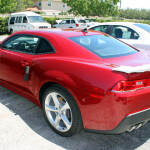 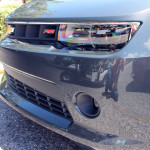 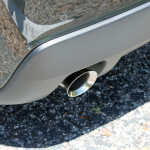 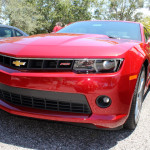 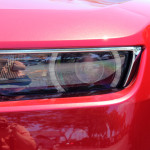 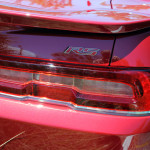 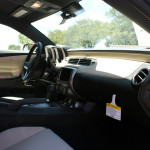 About the Author: Jay